Opening speech by the South African Ambassador to Switzerland on 11.2.1995

Pictorial References, Comments and Other Stories

Born of a Zulu father and a Swazi mother; was married, had 7 children. Lived in Kwa-Thema, Springs, Transvaal, until 1981, thereafter near Pongola on the Swaziland/Mozambique border. Never travelled beyond the SA borders, except to Lesotho and Swaziland.

To find out more about Lucas SITHOLE and his FAMILY, please click here!

in Europe and Africa

(incl. 50% of the unfinished works at the time of Lucas' death, donated by the Estate and The Haenggi Foundation Inc.)

University of the Free State, Bloemfontein

University of the Witwatersrand, Johannesburg

University of the North West, Mmabatho

University of the North, Sovenga

(incl. 50% of the unfinished works at the time of Lucas' death, donated by the Estate and The Haenggi Foundation Inc.)

The Rupert Family Foundation for the Arts, Stellenbosch

including Europe and the U.S.A. 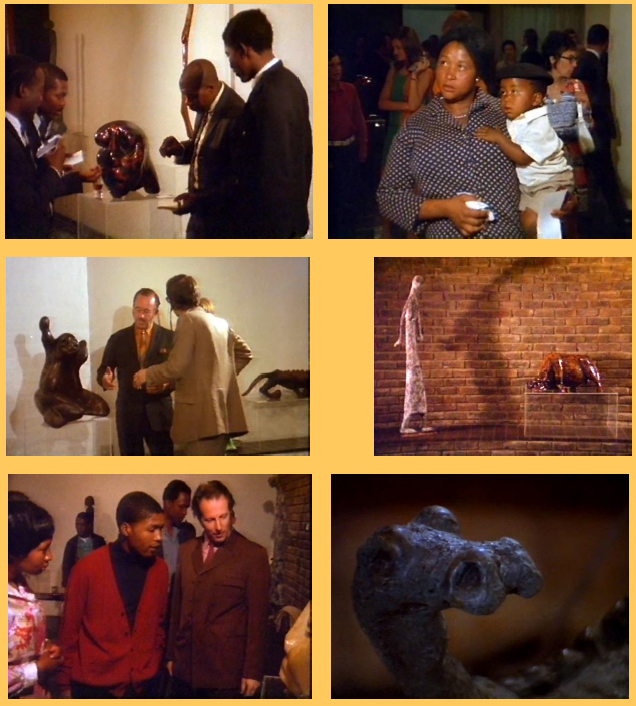 Stills from the show's opening at Gallery 101 Johannesburg on 5th October 1970 per documentary produced and directed by Richard Harvey 1968/1970, shown on Youtube

1985/86 "Quellen und Strömungen", presented by BMW in Germany and Austria

2001 "The Short Century", curated by Okwui Enwezor, exhibited at:

in Africa (other than South Africa)

The total oeuvre completed by LUCAS SITHOLE exceeds 800 sculptures in wood, stone, liquid steel and bronze, most of which have been recorded and over 480 photographed. About 200 sculptures are in collections in Europe and the Americas.

Full Copyright on all works by Lucas SITHOLE is held by The Haenggi Foundation Inc., Johannesburg / Basel  under copyright agreement with the artist's Estate.

You need the written permission of the copyright holders to reproduce any of the works on this website in any manner, including all other sculptures or paintings created by the late Lucas SITHOLE. Obtaining copyright permission will as a rule only entail the cost of sending a few copies of your publication for archival purposes, supplying professional slides and notifying us, giving full details, so that our master register may be kept up-to-date. All infringements may cause you unnecessary legal costs !

AVAILABILITY TO MUSEUMS AND INSTITUTIONS

A few major works are available to institutions

in Europe or the U.S.A. on long-term loan or as a conditional donation - please contact webmaster for details!.

Opening speech by the South African Ambassador to Switzerland on 11.2.1995

To read this speech in German, please click here.

Pictorial References, Comments and Other Stories

View of part of the exhibition held at the Pretoria Art Museum in 1995 following the donation of numerous unfinished works from the Estate of Lucas Sithole. In the forefront left "Just a few drops", 1979 (LS7909) is to be seen.

View of part of the memorial exhibition held at Galerie der Kunstsammlung Unterseen, Stadthaus, Unterseen / Interlaken, Switzerland, in 1995, showing numerous sculptures by Lucas Sithole loaned by collectors in Switzerland. A video of the exhibition, uploaded in 2012, can be seen on this link.

One would normally imagine it being of special significance to have a work selected by a famous guest curator to be included in an international travelling exhibition (The Short Century - Independence and Liberation Movements in Africa 1945-1994), as shown at the Museum Villa Stuck, Munich, thereafter in Berlin, Chicago and New York, during 2001/2002. As the title of the exhibition implies, the criterion was not whether the work represented the artist at his best, rather it seemed to fit in with the theme.

Thus a lesser painting from the artist's short formative period in his early career was chosen!

It's about time that international museums and public institutions stopped presenting art from South Africa just for the sake of politics.

In this connection, it is worth mentioning that Lucas SITHOLE supported financially his local community (such as helping to build a local school near Pongola) and he donated to selected charities whenever he was able to.

Lucas Sithole often used to give an explanation why he made his sculptures. The following are typical stories and should be read with reference to the relevant images as indicated:

The story of the 4 heads

"Guduza Nkunzikayikhathali" ("Non-tiring Bull") (LS7417) is a very hard working man. He is married to "Ngixolele Baba" ("Forgive me") (LS7407) - she is his wife no. 1. They have one child together and then he leaves to go and work on the mines in Egoli (Johannesburg). When he returns after 5 years he is very upset to find 3 children in his hut under his wife's care. He asks her what happened and she tells him to go to his mother whose name is "Magodovu" ("The Peacemaker's wife") (LS7340).

Whilst he was away working on the mines, she went to this old lady with her problem - she could not stay on her own any longer and she wanted to leave and go and find a new husband, but the old lady loved her very much and did not want her to leave the family. She told her that she should go and live with her youngest son, her husband's brother. They had 2 children together which accounted for the husband's anger and it hurt him that his wife could not wait for him and that she went to live with his brother and had 2 children by him. But after his mother had explained the whole story to him, he understood and went back to his wife, and they were very happy.

The "Non-tiring Bull" (LS7417) then met another woman with whom he fell in love; he paid the lobola and married her. Her name was "Thembekile" ("The Faithful Woman" (LS7403). They only lived together for one month before he went back to work in the mines, whilst she stayed at home waiting faithfully for him to return once again.

An old woman was tilling the fields, carrying her baby on her back. As the day got longer, she could not carry the baby any more so she put him down on the ground. Soon thereafter she heard a large bird behind her swishing down, and before she could react, that bird - the large Eagle (LS8109) - had carried her baby away in his claws.

She tried to explain this later to her friend (LS8312), showing how the Eagle had come down with wings and claws outstretched, ready to pounce (LS8316). However her friend did not believe that an eagle could have taken a child away, and so they kept on throwing words at each other.

And so they argued until the friend finally agreed that if it was an eagle, it could not have been a female, for surely she would feel for small children and would not have taken the baby away; rather it could only be a male Eagle (LS8315) who would do such a thing and be strong enough.

This story was told by Lucas Sithole at the time of his exhibition at Gallery 21, Johannesburg, in 1983, when all four works were on display. The base of the eagle LS8109 actually depicts a baby's head. The male eagle LS8315 is depicted with claws turned into men's trousers.

See the sketch Lucas SITHOLE made!

Here are a few links of interest to present or potential owners of works by Lucas Sithole:

Please contact us if you own a work to enable us to update our master register at no charge to you ! This information is confidential and will only be used for museum exhibition purposes outside of Africa, and is in your interest for identification purposes.