This refers to any works Lucas SITHOLE made in the period after his studies at the Vlakfontein Technical College in 1948 (where he learned carpentry, cabinet making, chiselling, welding and building) to the Polly Street Art Centre in downtown Johannesburg (where he studied painting during 1959-1960), whilst employed by a traditional arts & crafts shop in Johannesburg's city centre.

Over the years, and with increasing international exposure of Lucas SITHOLE, a number of works from this

have been offered by owners through galleries, auction houses or other avenues, requiring authentification.

A record is kept by The Haenggi Foundation Inc., Basel.

A borderline case discovered in the USA in 2011 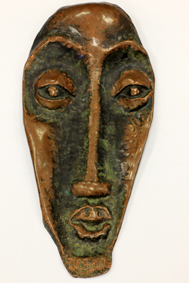 >>>>   In view of the increasing number of doubtful works or fakes being offered lately, you are referred to the PDF document F06   <<<

One day in early 1960 when the Adler Fielding Gallery was a mere tin shed on the roof garden of the old Pim's Buildings in Kruis Street ... long since demolished ... a young, shy, very self effacing African walked timidly into our workshops. He very hesitantly opened the canvas bag he was carrying and pulled out two wood carvings of African women.

Lawrence Adler and I were most impressed with the works. We gathered that he had been working at the Polly Street Art Centre under Cecil Skotnes, studying painting, and modelling in clay. He said that he had always wanted to do fine arts, but he was sent by his parents to learn carpentry and cabinet making. Work in a soap factory and mixing concrete for a builder followed his carpentry training. Finally he bought some tools and began carving figures out of wood.

Lawrence and I offered him fifteen guineas apiece for the works which he humbly and gladly accepted. We also asked him to bring everything he did to us. The timid young man with the shy smile that we were to know so well was on the road to fame".