Note: from this work, 3 authorised bronze casts were made through Gallery 101. In addition, Renzo Vignali had made a foundry cast unrecorded until 2010 - see below!

Whereabouts and condition of this cast not known

This signed cast - LS7003.3 - was only discovered in 2005 by Lucas Sithole's son Johannes Buti who lives in his parents first home and who found it dug under some rubble in their garden, together with 5 other hitherto unrecorded unsigned and unfinished works from his father!

This cast had been broken at the neck and was repaired by Johannes Buti in 2005 and professionally by the Everard Read Gallery in 2006 and its sale was accordingly permitted by the copyright holders on behalf of the whole Sithole Estate.

This until 2010 unrecorded unauthorised foundry cast was acquired by first purchaser NM directly from the Renzo Vignali Foundry, Pretoria

The original work in Lucas SITHOLE's studio is illustrated on YOUTUBE. 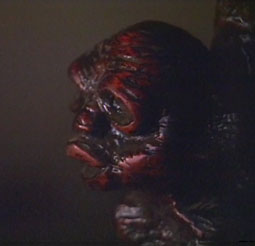 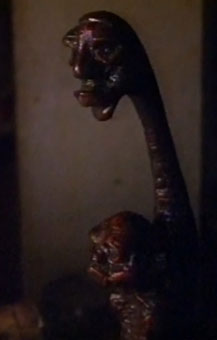 Stills from the documentary "Lucas Sithole, sculptor" produced and directed by Richard Harvey in 1968/1970. The 12' documentary can be seen on http://youtu.be/mhOqAuqn1OE.

Lucas SITHOLE is explaining his work which relates to his life around him, supported by music composed by Professor Alan Solomon. Included are a number of views taken at the studio in Kwa-Thema, including this work at various pos. between 5'14" to 5'33", and of the work on show at Gallery 101 in October, 1970 at pos. 9'26".